Well, this picture really did start out as salt, however I don’t know if it ended up as flowers.  It was the last piece of  large drawing paper that I had and I thought I would do something with it.  First I went crazy with a rubber stamp that I had–didn’t like that effect.  Then I decided to stain it with acrylic ink.  I thought I would try multiple layers and ended up wetting the paper too much.   Oh,yes, and I salted it too–the salt soaks up the excess color and leaves a nice stippled (is that the right word) effect.  After letting it dry for two days, I obliterated the whole thing with charcoal.  Now I had a large, somewhat buckled, totally charcoal’d piece of drawing paper.  Then I began erasing and drawing the figure into the charcoal.  The color underneath the charcoal began to emerge but everything looked too dark.  When I had the figure in place; I began to paste the paper into the figure.  I wasn’t really sure about this,however if it didn’t work out I could file it in the lost and found aka the garbage.  Now everything really was too dark except the head which looked like a large lemon floating in muddy water.   I finally added in some pastel to lighten it up a little and the ugly, mucky looking areas are glass bead gel; which I’ve been working with lately.  I wanted to give the appearance of salt.   All of this was topped off with fixative and matte media.  I call it Lot’s Wife:  Turning Salt Into Flowers because that’s what women do!  We’re famous for making the best of bad situations.  Nothing epitomizes this more than this particular picture.  I spent a month on it; thinking all the time it would emerge into something acceptable.  As I said above, I have mixed feelings about it, but I won’t file it since, for me, it has it’s own beauty.  Who says art has to be beautiful–Lot?  We all know what happened to him–he never looked back, never saw his wife turning around, never saw the conflagration that mesmerized her–he never saw the art in the fire, or the salt in the wound, or the flowers in the picture. 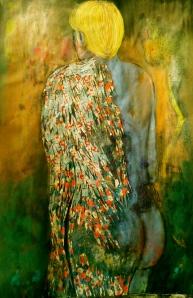 This work is licensed under a Creative Commons Attribution 3.0 Unported License.